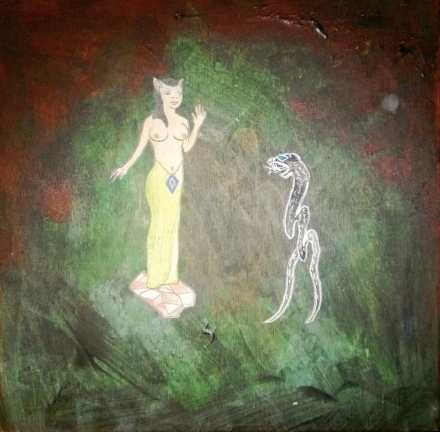 More and more animals are starting to walk upright.  What’s happening?  Some kind of reality wave washed over everything.

There are reports of chimpanzees who seem to have evolved, that they’ve learned how to use fire and are burning each other’s villages.

Minds bent against it, trying to figure it out…  Things have changed and it doesn’t make sense and no one knows what’s happening.

Like the fuzzy blob that started hovering over my right shoulder and following me around.  It just hovers there constantly and I don’t know what it is.

According to fate researcher and internet shaman Isaac Candlemas, the Cosmic Cobra has sunk its fangs into the world.  As good a theory as any.  The venom is working its way through the planet, and the effects we’re feeling are akin to the planet’s immune response.  Earth’s reality swelling up.

There was already enough in the world to go mad over without this.

A neanderthal was suddenly beamed into this year, found itself downtown not knowing what to do.  I can sympathize.  The neanderthal backs up against a wall and watches people.  Uncomprehending primal eyes surveying its surroundings…  what is this place?

Eventually the neanderthal will lash out.  If it cannot get food.  In time if it cannot get sex.  It will be arrested for indecent exposure, lost to history.

Who will slay the Cosmic Cobra and save earth?  No one will, we don’t have weapons powerful enough.  We’re not even acknowledging its existence or the reality of the plane it resides on.

Our only option is to wait it out, perhaps it will get bored with us and slink off into the void, and then the planetary fever can subside.